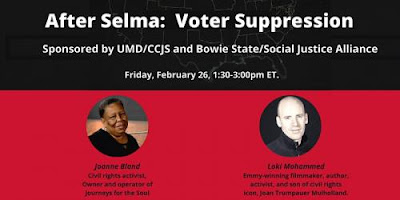 Join the Department of Criminology and Criminal Justice at the University of Maryland and the Bowie State/ Social Justice Alliance for a vewing of the documentary film After Selma, followed by an interactive discussion featuring Selma civil rights activist, Joanne Bland, and documentary filmmaker, Loki Mulholland.

Joanne Bland has been a witness and participant in some of our nation’s most consequential civil rights battles. She began her civil rights activism in the early 60s. The Student Non-Violent Coordinating Committee (SNCC) activists organized Bland and other area children and teenagers to participate in the civil rights movement. In the front lines of the struggle, the young Bland marched on "Bloody Sunday" and "Turn Around Tuesday," and the first leg of the successful March from Selma to Montgomery, witnessing brutal beatings of fellow marchers by police. The young Bland was also one of seven Black students to integrate A. G. Parish High School. By the time she was 11 years old Bland had been arrested 13 times. Ms. Bland’s early involvement in the struggle against “Jim Crow”, American apartheid, has been the foundation for her civil and human rights work throughout her life.

A much sought after speaker with a compelling personal story of civil rights activism, Ms. Bland has presented at conferences and workshops from the Smithsonian in Washington, DC to the states Maine, Wisconsin, Vermont, Minnesota, Georgia, Pennsylvania, Texas, New York, New Jersey, North Carolina, South Carolina, Iowa, Mississippi, Washington, Oregon and, of course, throughout Alabama. Currently, Mrs. Bland is owner and operator of Journeys For The Soul, a touring agency that specializes in Civil Rights tours with a major focus on Selma, Alabama.

Loki Mulholland is an Emmy-winning filmmaker, author, activist and son of civil rights icon, Joan Trumpauer Mulholland. His work has received over 40 Telly Awards and his films on race and social justice issues have won 20 Best Documentary awards. His first book, "She Stood For Freedom" was nominated for the 2017 Amelia Bloomer Award. Loki’s film, “The Uncomfortable Truth” has been viewed over half-a-million times on Amazon. A member of Omega Psi Phi Fraternity, Inc., Loki speaks all over the country on issues of race and social justice. He is the founder and Executive Director of the Joan Trumpauer Mulholland Foundation which was created to end racism through education.

Posted by Program Director for Experiential Learning at 1:14 PM